What dictionaries do I recommend?

I get a lot of questions about dictionaries and which I would recommend to students. I decided to create a post about it so that replying to you is much easier in the future (clever me :) ).

First off, I do not think google translate is the key to everything. Once in a while, sure, especially if, like me, you know the English phrase but for some crazy reason you cannot remember its Polish equivalent and looking up the word is simply a matter of reminding yourself of the word.

Google translate (GT) is a quick fix if you need something ASAP but not if you want to learn something (hopefully) permanently.

The magic of the dictionaries I want to show you is that they are all recognised and respected sites which definitely give you accurate information in various contexts and clear examples.

(Let it be known that I am not actively promoting any particular dictionary, no one is paying me for endorsing these sites and all I get is the satisfaction of letting you know that these websites exist :) )

- an Advanced Learner's Dictionary but could also prove useful for less proficient learners. 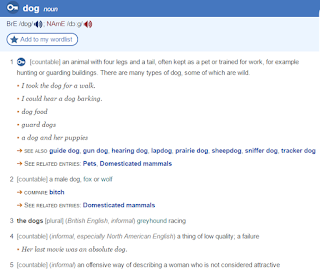 As you can see above, it is quite straightforward.

It gives you the part of speech, very often the most common synonyms. And what is most important for me:  examples, examples, examples of various meanings. In other words, you have the clear context of a definition and also the associated grammar connected with a phrase (like take a dog for a walk)

A nice nice touch is also the British and American pronunciation.
As some of you may know, I am a big fan of American English - so whenever I see dictionaries with both options I am pleased. :)

Now, the million dollar question: what is this little key next to the word?

This is Oxford's way of indicating that the phrase/word is part of the group of 3000 most common words in English. Whether a word/phrase belongs to this group depends on its frequency.  So how often it appears in written or spoken texts. All these texts are stored in the British National Corpus and the Oxford Corpus Collection.

- A dictionary that prides itself on giving definitions of words that use only 2000 of the most common words. This means that you can can be a B1 student (intermediate) and should be able to understand the definitions and not always rely on bilingual dictionaries.

The difference between this dictionary and the first one is that in (O) you can get lost in the list of all the phrases and meanings of one phrase/word. You need to scroll down to the bottom of the page if you are looking for idioms or something more complex than the simple "dog".

In (L) you type in the word in question, and the first thing you need to do is decide exactly what phrase you are looking for: 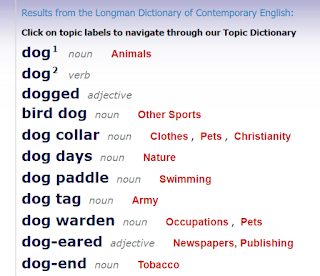 This is a great opportunity to actually learn new stuff, as even if you are looking for a simple definition of "dog" you see there are countless other options and start browsing. You don't get lost or discouraged by the vast amount of text like in (O).

what you don't get in (O) is a professional pronunciation of not only the phrase you want but also  (many of) the examples! Because it is not read by a machine ( at least from what I've noticed) you can listen to the stress  and connected speech which is a huge advantage if you don't have access to a teacher. :)

Longman's dictionary also shows you how often a word is used in English (according to the Corpus).  It uses a different method, though.
You will not see this with every entry but it looks like this:

The EXTREMELY useful thing about Cambridge is that it offers you a bilingual option for many popular languages  including Polish!

This means you have a much more reliable souce of information than Google but you know for sure that the translations of phrases/ idioms / words are accurate! 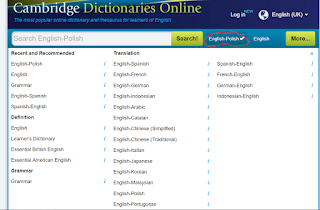 It is very similar in its layout to (O) with more phrases on the right in the corner; it gives you both British and American pronunciation. And also allows you to check the word/phrase in various languages.  But, to me, it seems to be less detailed than (L) or (O).
Does it mean it is more aimed at Intermediate / Pre-intermediate students?

It does, however, have a feature that I find very useful as a teacher: 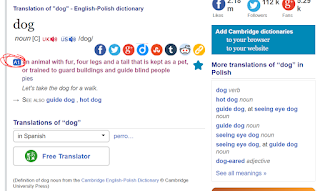 It states what level (according to CEFR) a word/phrase belongs to.

All the dictionaries above are excellent for language learners (or teachers). They provide much more information than your beloved Google Translate. They all have something unique about them and all should be used on a regular basis.

What would be the ideal thing to do? When studying new vocabulary to check the meaning of an item in all three dictionaries, to see the differences in explanation, listen to different pronunciation, examples. But realistically speaking, do we have time for all this? :)

What dictionaries do you use? Tell me in the comments! And once you start using these, tell me what you think, there probbably is a ton of stuff I still have not discovered about those websites. :)

Broszka
English Teacher. Cat Lover. Entertainer. Back after four years of complete silence. Four years of travel, teaching, and tons of experience. Hold on to your hats people! The Brooch is back!

Translate to your language